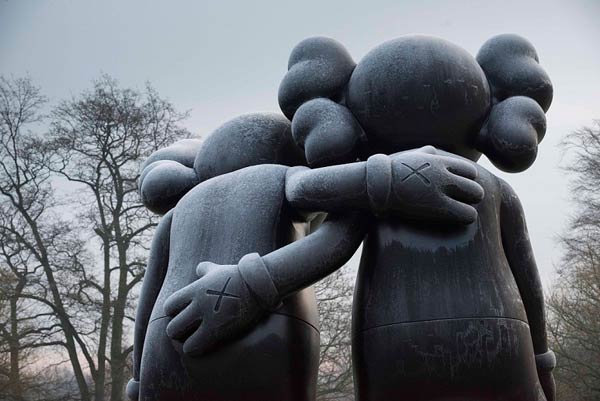 This is your chance to see original work from internationally recognised American artist KAWS as he is making his first UK exhibition.  Located at the Yorkshire Sculpture Park and at Longside Gallery you’ll be able to see original paintings, printmaking, sculpture and design.

If you’re thinking about visiting you can get more information on the YSP website.

The exhibition is in the expansive Longside Gallery and open air, featuring over 20 works: sculptures in bronze, fibreglass, aluminium and wood alongside large, bright canvases immaculately rendered in acrylic paint – some created especially for this exhibition.  The Park’s historically designed landscape also becomes home to a series of monumental and imposing sculptures, including a new six-metre-tall work, which take KAWS’s idiosyncratic form of almost-recognisable characters in the process of growing up.

Brooklyn-based KAWS is considered one of the most relevant artists of his generation. His influential work engages people across the generations with contemporary art and especially opens popular culture to young and diverse audiences. A dynamic cultural force across art, music and fashion, KAWS’s work possesses a wry humour with a singular vernacular marked by bold gestures and fastidious production.

In the 1990s, KAWS conceived the soft skull with crossbones and crossed-out eyes which would become his signature iconography, subverting and abstracting cartoon figures. He stands within an art historical trajectory that includes artists such as Claes Oldenburg and Jeff Koons, developing a practice that merges fine art and merchandising with a desire to communicate within the public realm. Initially through collaborations with global brands, and then in his own right, KAWS has moved beyond the sphere of the art market to occupy a unique position of international appeal. 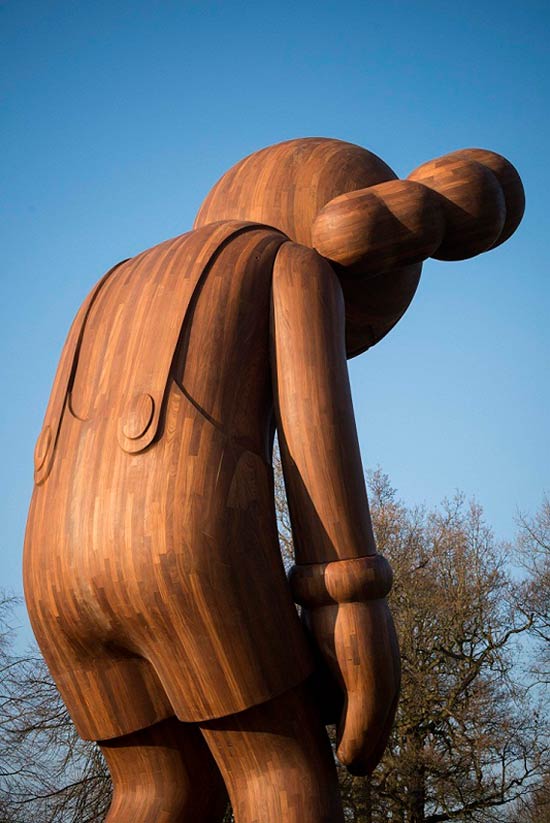 KAWS absorbs popular imagery to produce works that are semi-familiar, with layers of contradictions and subtleties. Outdoors, with their outsize and monumental proportions, KAWS’s sculptures bring to mind dystopian cartoon characters; recognisable personalities from childhood who appear to have lost their innocence. Against the Park’s tree line, the group of six works in natural and black-stained wood, measuring between six and 10 metres in height, are simultaneously spectacular and plaintive. Once bright, iconic characters are rendered in disheartened, world-weary poses; imposing yet full of pathos, they point to an array of psychological narratives, suggesting compassion, surprise and despair.

In Longside Gallery, KAWS’s oeuvre is further extended by works including ACCOMPLICE (2010), a baby pink monstrous rabbit figure, a neon pink CHUM (2009), a bulbous figure, and the spermatozoa-like BORN TO BEND (2013), while COMPANION (RESTING PLACE) (2013), and the three-metre-high COMPANION (ORIGINALFAKE) (2006) from the artist’s Tokyo store, with its skin peeled back to reveal highly coloured internal organs, is profoundly exposed. HE EATS ALONE (2014), fabricated in Corian and aluminium is a hybrid sculpture/painting, while UPS AND DOWNS (2012), the artist’s series of 10 acrylic canvases, point towards SpongeBob. 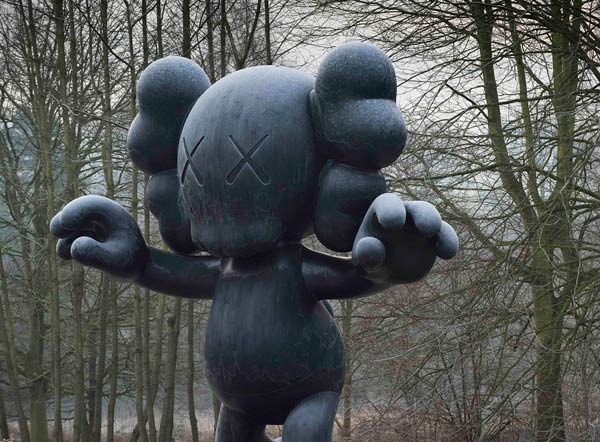 The artist has made a series of five paintings especially for the exhibition. Each measuring 112 x 92 inches, they will span the largest wall of the spacious gallery, creating a swathe of brilliant colour and complex energy. Constructed with painstaking attention to detail, the abstracted forms overlay and interweave, forming shadows and deepening space to reveal a slinking, enigmatic figure.

The exhibition continues YSP’s commitment to sharing the best of international practice with a diverse audience. It is accompanied by an extensive publication including texts by YSP Director of Programme, Clare Lilley, and Flavia Frigeri, Tate Curator of International Art, together with events including an in-conversation between the artist and Clare Lilley, on 6 February 2016, and exclusive merchandise, designed especially for YSP by KAWS.

A survey exhibition of his work opens at the Modern Art Museum of Fort Worth, Texas in the autumn of 2016. His work has been shown in the public realm, including ARTZUID outside the Rijksmuseum, Amsterdam; Frieze Sculpture Park, London; and Hong Kong’s Harbour City.

He has collaborated with international brands including Comme des Garcons, Nike, Lucas Films, and MTV, for whom he created a huge inflatable version of the iconic Moonman for the 2013 Video Music Awards. He has made cover artwork for the October 2015 W Magazine Art Issue (with Drake) and for Kanye West’s 2008 album, 808’s and Heartbreak. In addition to clothing and other items, he has made limited edition vinyl toys since the late 1990s, including with Japanese company Medicom Toy and his own company OriginalFake.