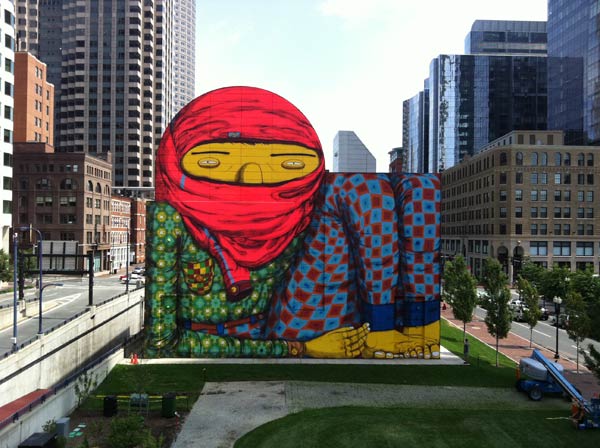 Os Gemeos visiting Milan, Italy this April for Outside the Cube

Os Gemeos painting for “Outside the Cube” in Milan this April

Pirelli HangarBicocca presents the new public mural, Efêmero, the first large-scale in Italy by Os Gemeos, who are among the world’s most renowned contemporary artists. This work on the outer walls of Pirelli HangarBicocca, to be inaugurated on April 20, 2016, is part of the new three-year project “Outside the Cube” which will involve innovative new approaches to art in public space and a rich calendar of parallel events. The industrial site of Pirelli HangarBicocca, where in the last century trains were made, will become the ideal setting for the work of Os Gemeos and the many artists to follow.

For more information you can check out the Pirelli HangerBiocca website. 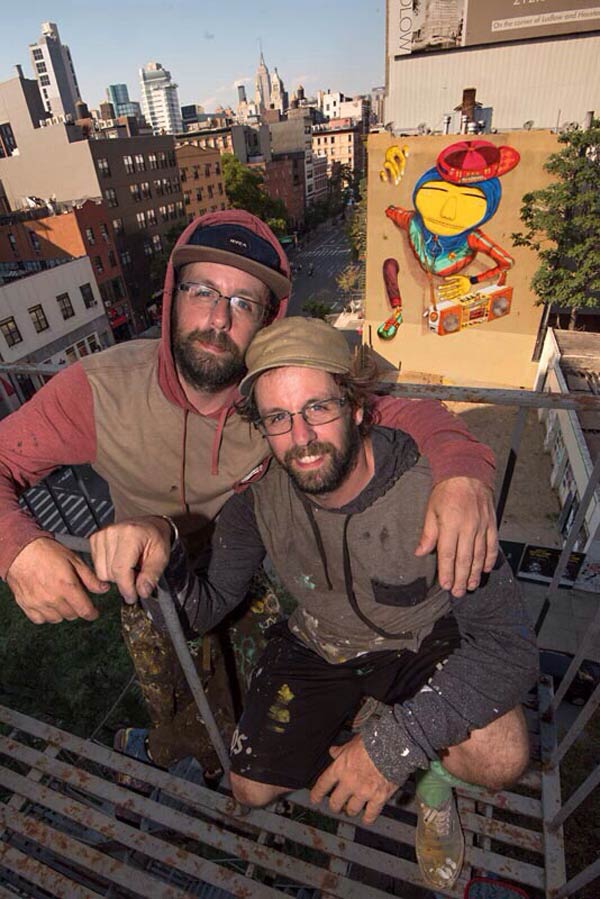 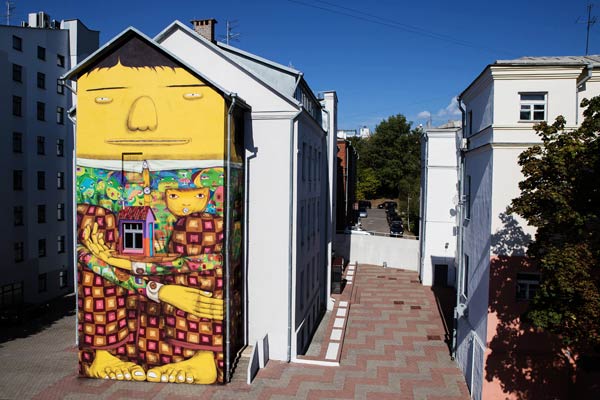 The project at Pirelli HangarBicocca will delve deeper in to the artist’s unique universe of mysterious symbolism and alternative realities.  The works of Os Gemeos are often huge in scale, matched with their distinctive patterns and colour schemes, referencing the natural world and improvisation of São Paulo.  The project will explore the history and spectacular architectural setting of Pirelli HangarBicocca, using the site as a starting point for an iconic new production. The mural will not only be painted on the buildings facade but be incorporated into the buildings architecture. This is an ongoing theme in the artists work, to create murals that transform the facade of a building into a new structure. The project will be accompanied by a limited edition catalogue designed by the artists. The book will explore further the artists history of architectural interventions and include images of their works that have re purposed the built environment. 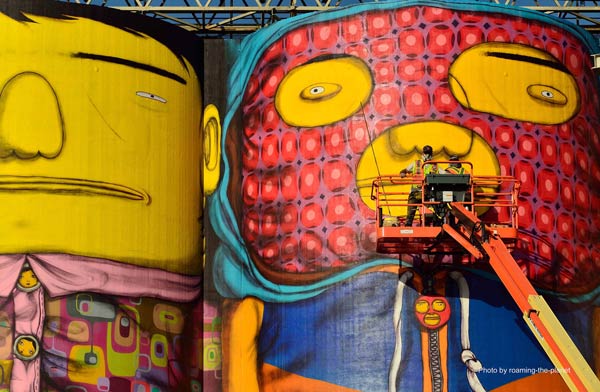 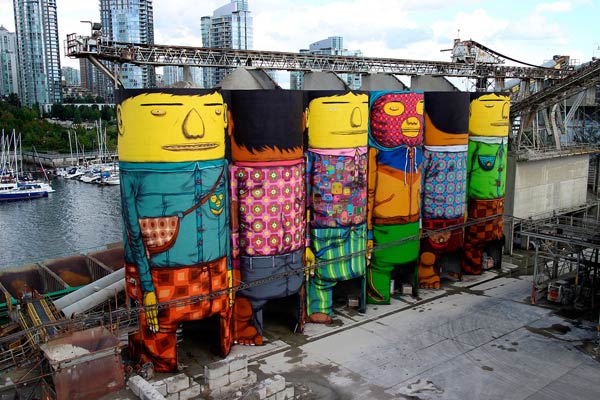 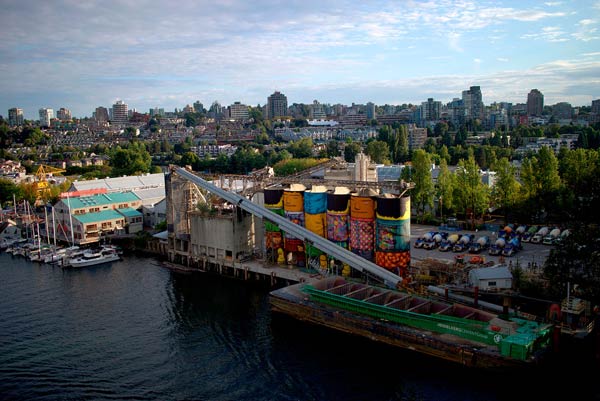 Curated by artist and writer Cedar Lewisohn – who has authored many publications on art, and curated the exhibition “Street Art at Tate Modern” in 2008 – the project by Os Gemeos will occupy for one year the two outer walls of Pirelli HangarBicocca’s Cubo space, covering a total area of a thousand square meters. It will also be visible from the nearby train tracks and from the street. Os Gemeos, literally meaning “the twins,” is the pseudonym of Brazilian twin brothers Gustavo and Otávio Pandolfo (b. 1974 in São Paulo). This artistic duo, whose roots are in hip-hop culture and graffiti, began in the 1980s to develop a highly sophisticated oeuvre recognizable for its dreamlike landscapes and poetic figures, drawing on a vast range of cultural, social and political references. 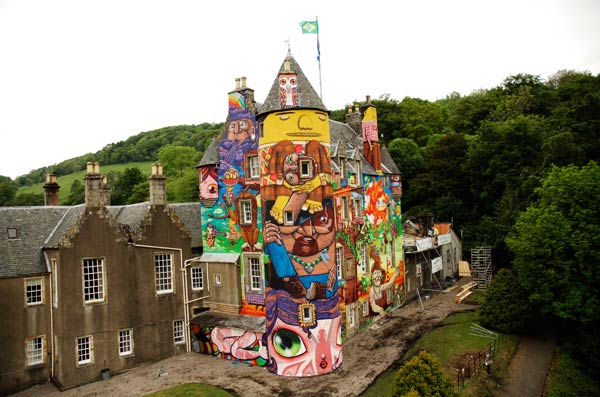 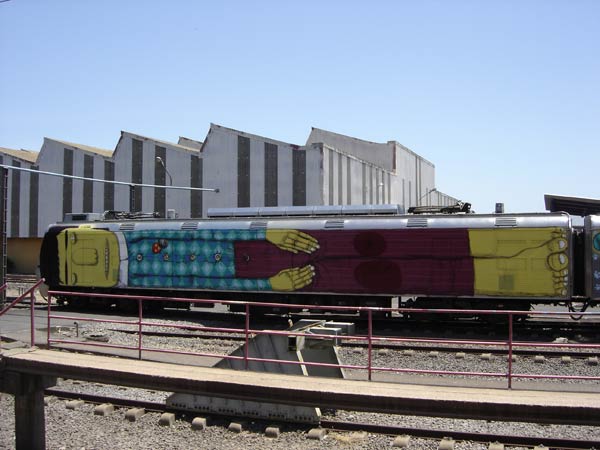 In a career spanning nearly three decades, Os Gemeos have helped spread culture through public spaces and into international museums, among others: 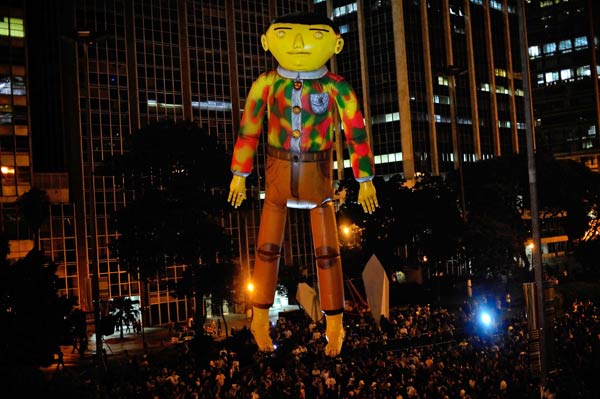 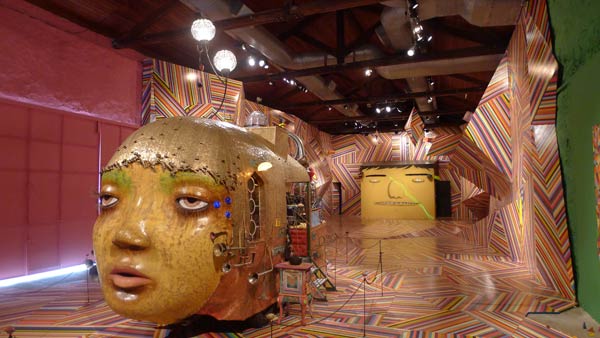 The three-year project “Outside the Cube”

Pirelli HangarBicocca, a cultural institution directed by Vicente Todolí and devoted to promoting contemporary art through the exhibitions of international scope presented in its indoor spaces, Navate and Shed, is expanding its borders; for the next three years, it will be dedicating a large outdoor area, some 1000 square meters, to new public art projects.

Over a three-year span, from 2016 to 2018, “Outside the Cube” project, curated by Cedar Lewisohn, will offer a rich, complex exploration of various themes through screenings of films and documentaries, public talks and readings.

Pirelli HangarBicocca’s education department will bring young people into contact with Italian and international artists, exploring their different languages and techniques, through workshops and summer camps designed for the age group of 12 to 17.

Through these activities, Pirelli HangarBicocca aims to begin a dialogue that over time, will turn the institution and its spaces into a new touchstone for developing and highlighting new artistic languages.

The “Outside the Cube” will link the phenomenon of art to the artistic languages that characterize the programming at Pirelli HangarBicocca, helping it strengthen its ties to the neighborhood.
The building of Pirelli HangarBicocca, a former train factory, is located in a district on the city fringes divided by the railway and dotted with vast former industrial lots, now occupied by creative SMEs, the University of Milano-Bicocca and other educational institutions, as well as a nursery school and shopping center.

Spontaneous works of art are already a major presence in the area, especially on the wall running along the train tracks from the Greco Pirelli station to the Sesto San Giovanni bridge. The parallel arteries of Viale Fulvio Testi and Viale Sarca, a few hundred yards from Pirelli HangarBicocca, also feature a project orchestrated by the City of Milan, in which dozens of artists were invited to personalize the light and gas meters scattered through the neighborhood.

Last year Pirelli, which shares the culture of the road, mobility and multiculturalism with Street Art, engaged this language by asking three international artists to interpret the tyre – the Brazilian Marina Zumi, the German Dome and the Russian Alexey Luka – and their works, assembled into a single installation, were hosted in the spaces of Pirelli HangarBicocca. 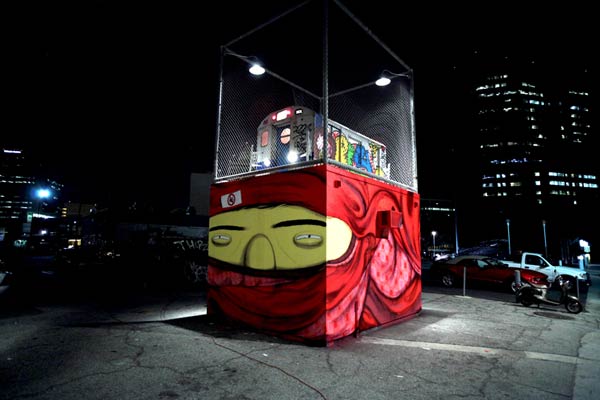