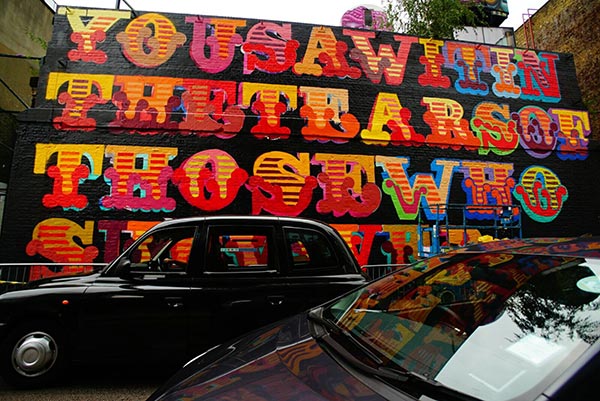 The brand new mural in London at Village Underground, to honour the victims and survivors of Grenfell Tower – has been completed and revealed today in a full photo gallery below created by the renowned English street artist Ben Eine, featuring a poem written about the disaster by the Booker Prize-winning Nigerian writer Ben Okri – marks the one-month anniversary of a fire that claimed at least 80 lives. 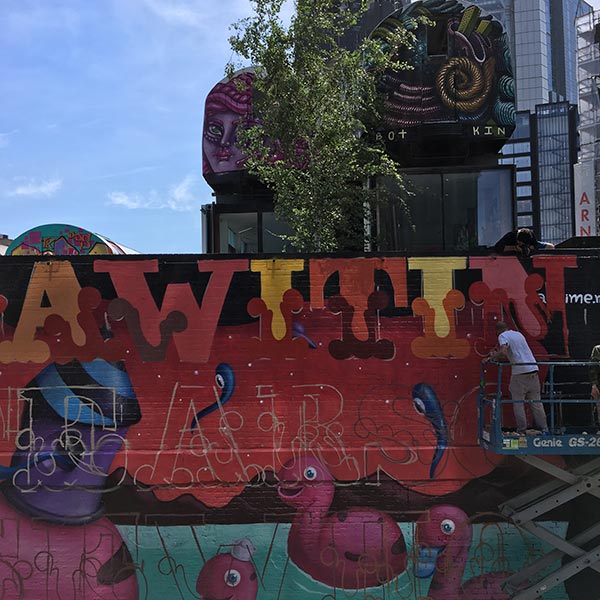 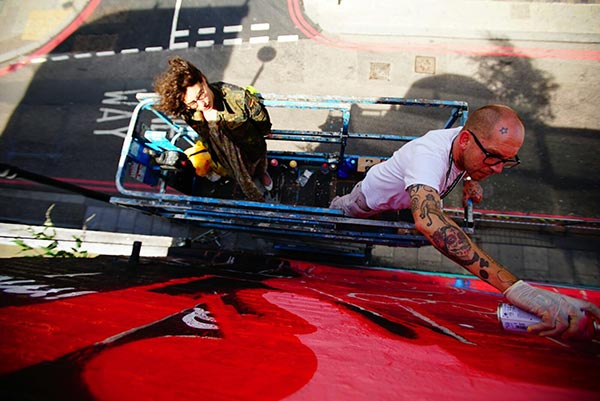 Paint the Change, a street art and social justice project, and Village Underground, the London venue where the mural will be painted, are sponsoring the work. The HSS hire company also provided discounted equipment.

Maziar Bahari, an Iranian-Canadian journalist and filmmaker who has lived in London for over a decade, started Paint the Change to stimulate dialogue around urgent social issues through the arts. The Grenfell fire artwork is the project’s first mural. 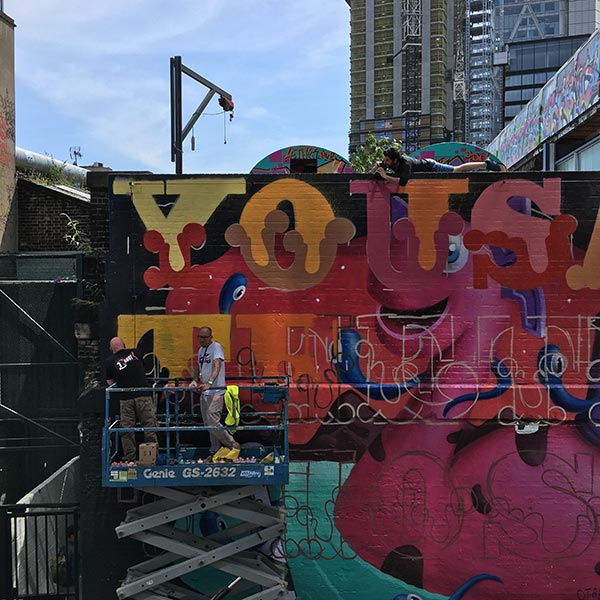 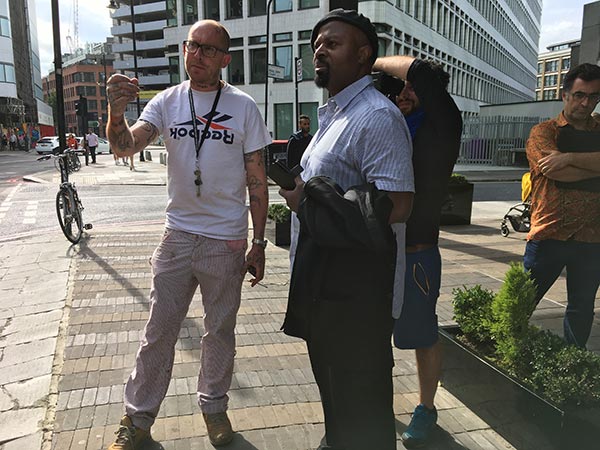 “I love London and I’m fucking angry,” Bahari said. “I love my city with all its history of wars, riots, swinging, resilience and diversity. I love the fact that dozens of nationalities live (mostly) peacefully together, and that we have the only Muslim mayor of all major western cities. But I’m angry about the chasm in this city. I’m furious that we don’t know, and we don’t care to know, about our neighbours. Like most people, I felt saddened and shocked when I saw the images of Grenfell Tower on fire. My anger was soon turned into helplessness and hopelessness. How could this happen? How could we allow dozens of innocent people to die because of the greed and carelessness of a few people?” 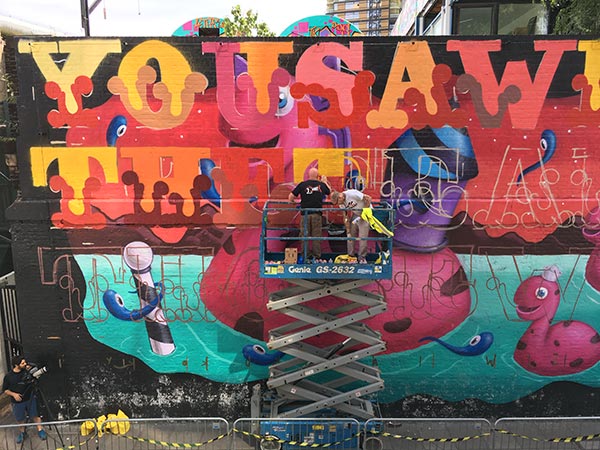 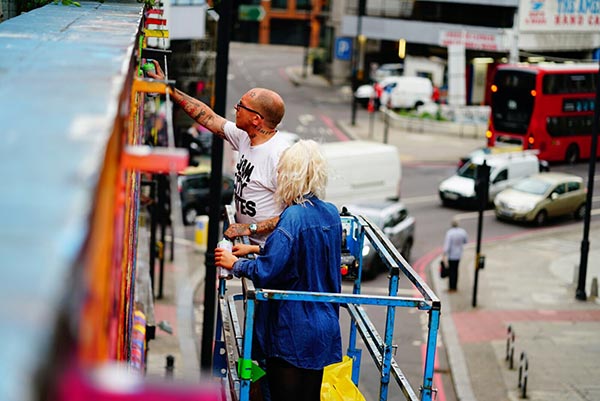 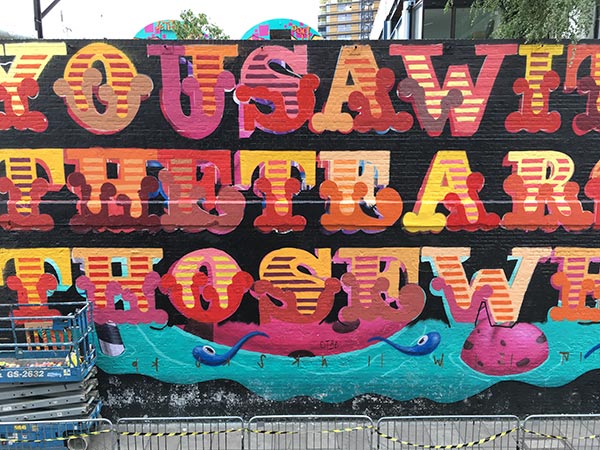 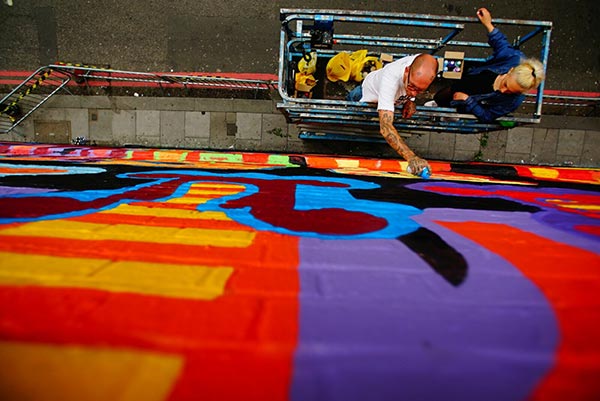 Okri’s poem “Grenfell Tower, June, 2017”, composed in the days after the fire and first broadcast on Channel 4 News and published in the Financial Times, will be rendered across the 120-square-metre wall of the Village Underground on Holywell Lane, Shoreditch, east London. The lines “You saw it in the tears of those who survived” will appear in Eine’s colourful style – with the full 1,600-word poem appearing across the wall as the background to the main text. 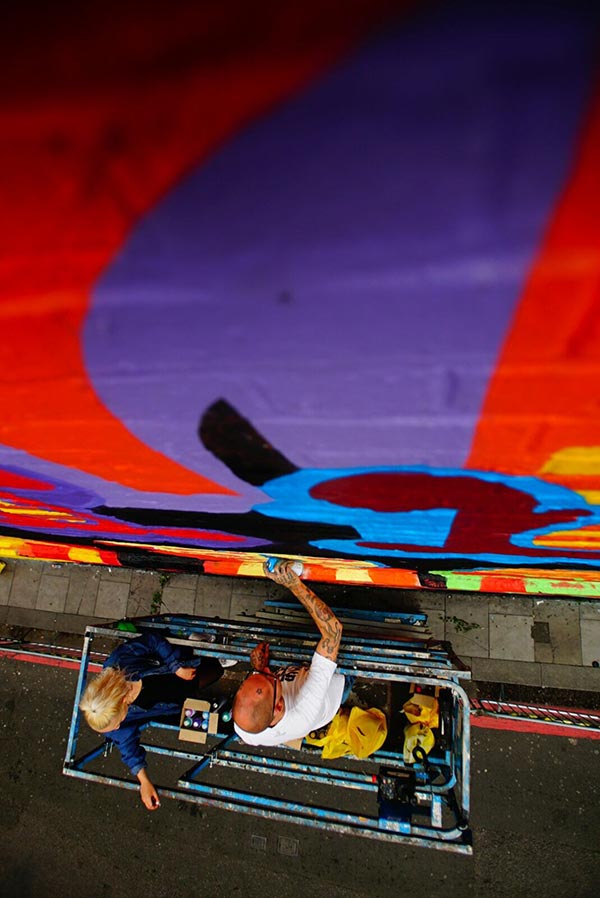 “I couldn’t stop crying when I saw that had Ben Okri said it all in his beautiful poem,” Bahari added, explaining his choice of Okri’s poem for the mural. “I repeated one line for days: ‘You heard it in the cries in the air howling for justice.’ This mural is our attempt to share Ben’s poem with rest of the world. We wanted to have this wall close to the burnt tower, but the tower is already there.” 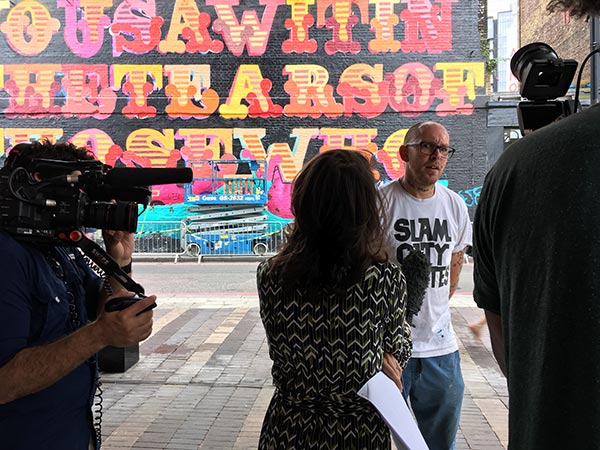 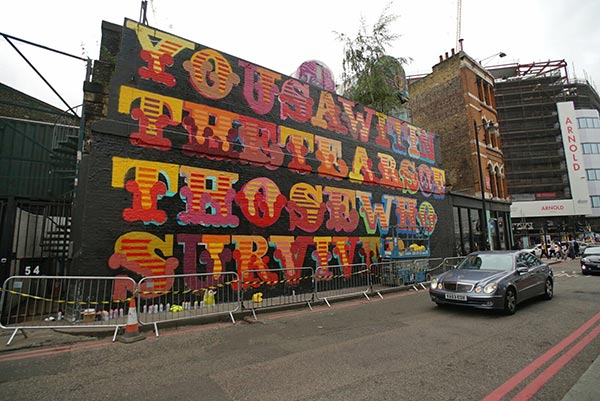 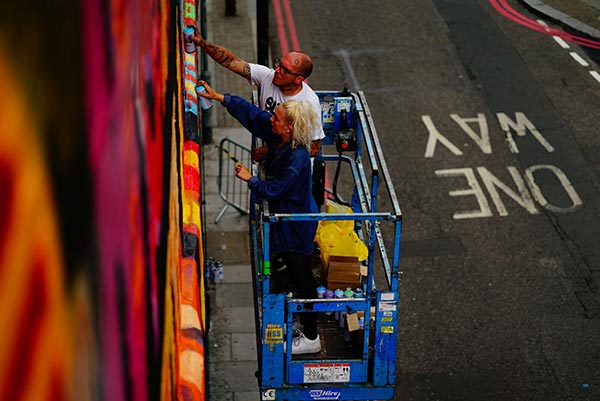 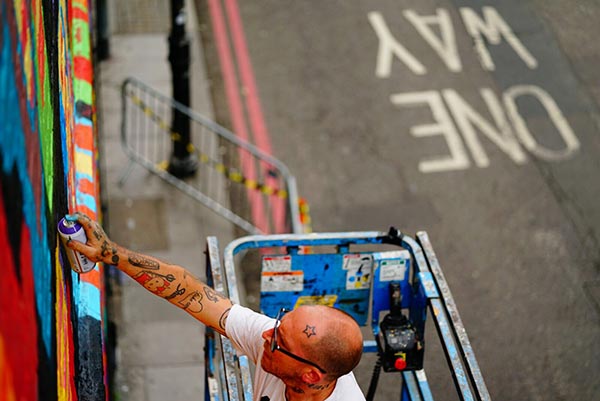 Okri won the 1991 Booker Prize for his novel The Famished Road. He was born in Nigeria and educated in England before taking up poetry and fiction in the 1970s. His writing has touched on political and social issues since the beginning of his career. Okri lives near the North Kensington neighbourhood where the fire took place.

“I think it is an extraordinary idea,” Okri said, referring to the mural of his poem. “Anything that can draw attention to that outrage to humanity, anything that can commemorate the dead and help the survivors has my support.” 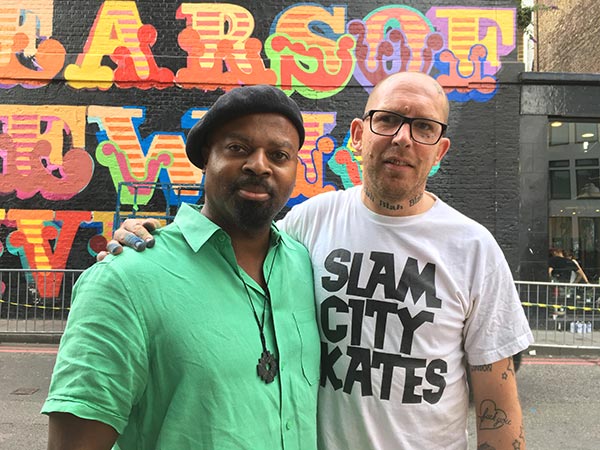 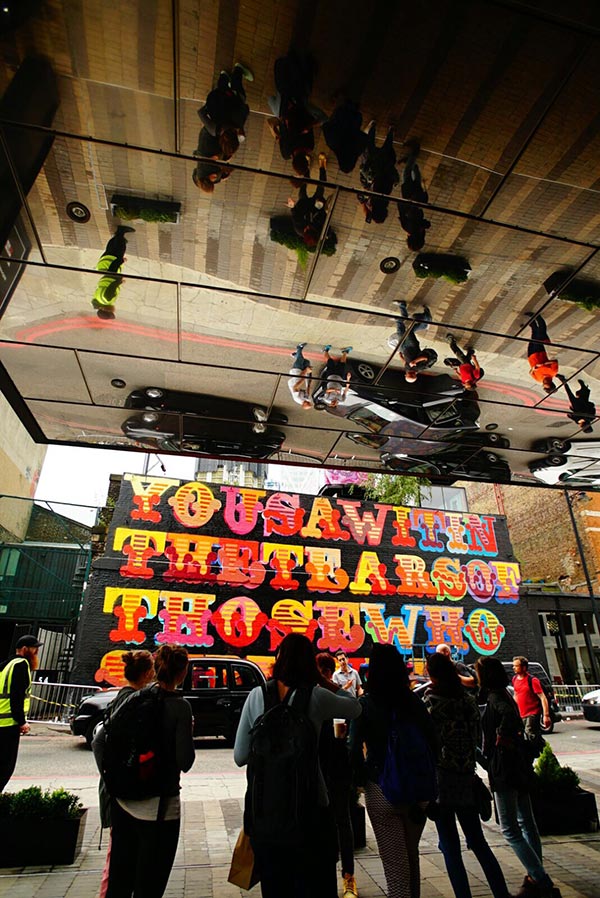 Eine’s work has appeared across east London and other cities around the world for over a decade. He was asked to design the Amnesty International 50th anniversary poster in 2011; a year earlier, in 2010, the former UK prime minister David Cameron presented an Eine work as a gift to former US president Barack Obama. 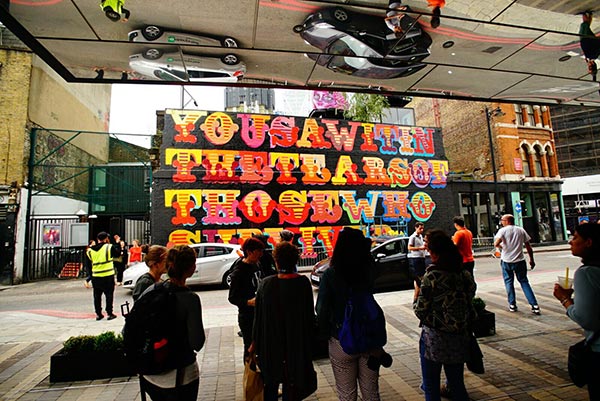 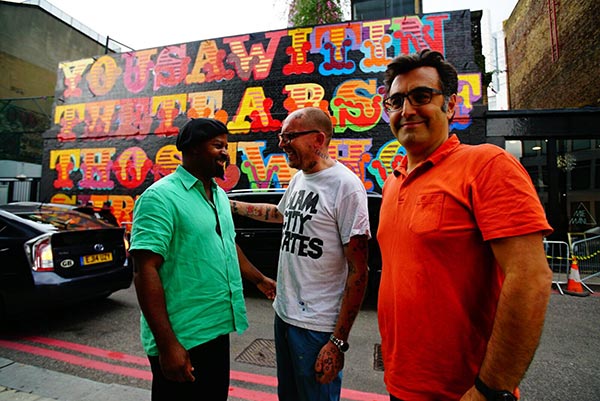 “As a Londoner,” Eine said, “with deep roots in the city’s subculture, I am proud and privileged to be involved in this important and historic initiative. Our hope for this mural, which we’re painting in response to the Grenfell fire, is that it will help keep this discussion alive and bring the victims and survivors out of the shadows so that they can receive justice. I’m happy that my skills can try to help make a positive difference after such an awful tragedy.” 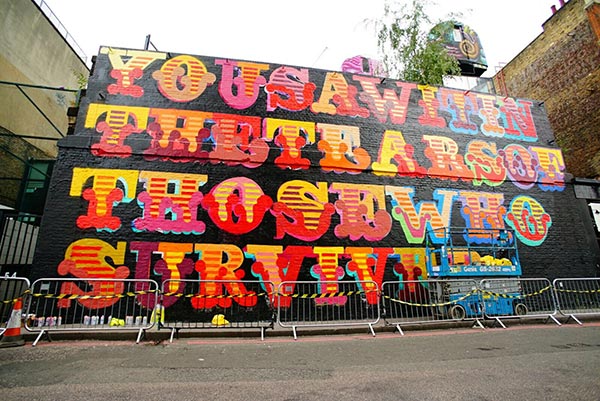 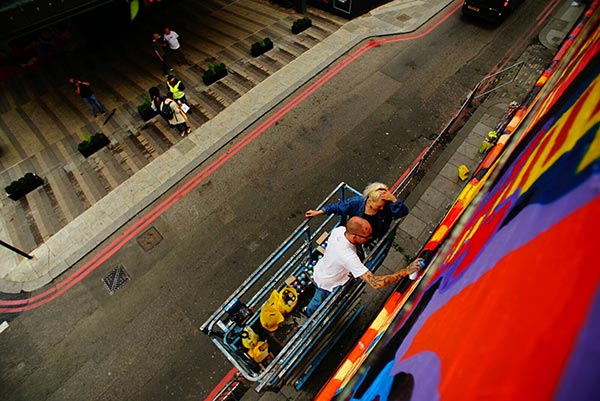 Paint the Change grew out of Bahari’s street art and human rights project, Education Is Not A Crime, which has produced more than 40 murals around the world and two documentary films to raise awareness of education inequality. The new project will use public art and film to address issues from injustice against minorities to environmental degradation and other social causes.

“Our wall in Shoreditch is an attempt to reflect the anger in west London in our corner of the city,” Bahari said. “We’re honoured to have Ben Okri’s blessing, and proud to be working with Ben Eine who’s going to create a new masterpiece on this wall.” 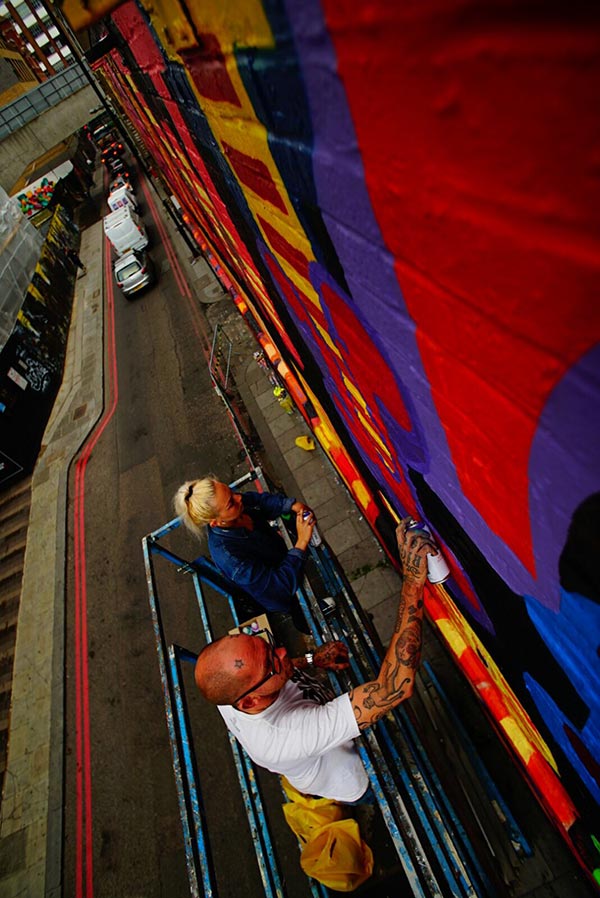 Village Underground has hosted murals on its Holywell Lane wall for 10 years – visible to thousands of people a day.

The new mural will be painted over 18-19 July and interviews can be arranged with Okri, Eine and Bahari at the site.